Flora Wood (1908 - 1998) was a Scottish painter who continued the long tradition of artistic sympathy between Scotland and France. Wood studied in Florence in the mid-1920s before attending Edinburgh College of Art. Wood's later studies with Andre Lhote in Paris enlivened her work with the spirit of European modernism, and on her visits to France and Spain she met Man Ray, Salvador Dali and Picasso. The Cubist elements in some of her pictures show her debt to Picasso as well as to Lhote, although her bold sense of design and colour was Celtic in origin. Many of Wood's paintings were influenced by the subject matter and stylization of Belgian artists such as Constant Permeke and Gustav and Leon de Smet, with their combination of Expressionism and Cubism and interest in 'folk' traditions.

Note: Flora Wood listed her birthdate in exhibition catalogues as 1910, but her obituary in The Scotsman states that she was actually born in July 1908, in Portobello, Scotland. 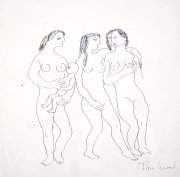