Susan Hiller (1940-2019) was born in the USA, and moved to London in 1973 where she was based for the rest of her life. Her practice encompassed museological and archival installations, video, photography, performance and writing. Major influences on her work included Minimalism, Fluxus, aspects of Surrealism and her early studies of anthropology; Hiller described her art as a kind of "archaeological investigation, uncovering something to make a different kind of sense of it".

Hiller had mid-career retrospectives at the Institute of Contemporary Art, London in 1986, and at Tate Liverpool in 1996. Her numerous solo and international group exhibitions led to her work being widely acknowledged as an important influence on younger British artists. Her work is represented in many international public collections, including four major installation works in the collection of Tate. A major survey exhibition of her work was held at Tate Britain in 2011.

Exhibited in Talking of Yves at England & Co (June-July 2010) 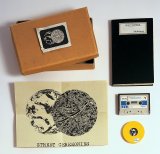 
Exhibited in The Map Is Not the Territory i, England & Co, 2001, and subsequently acquired from England & Co for the collection of the Museum of London.


Exhibited in The Map Is Not the Territory ii at England & Co 2002. Private collection.