Jack Bilbo was born Hugo Baruch in Berlin in 1907. He took the name Jack Bilbo in 1933, after his family's theatre outfitting business was confiscated by the Nazis. He was forced to flee to France, then Spain, before settling in London in 1936. A self-taught artist, he began to paint and sculpt and soon exhibited his work in London, but in 1940 was interned on the Isle of Man. During his internment he met other artists, and this led to his founding the Modern Art Gallery after his release.

Opened in London in 1941 during the Blitz, the Modern Art Gallery became a mecca for refugee artists like his friend Kurt Schwitters and many young British painters. As well as his own paintings, Bilbo exhibited works by Picasso alongside unknown artists, and held evening events of readings of Dadaist poetry and his own macabre and fantastic stories. After the war, the gallery closed and he moved to Weybridge where he created giant primitive figures in cement in the garden of his home. Local hostility led to these works being destroyed by dynamite after he left England. He moved with his wife Owo to the South of France in the 1950s, and eventually returned to his native Berlin where he died in 1967.

Bilbo's work is full of wild energy and violent colour. He once said: 'I am a lone wolf in my paintings', and his pictures are often savage and strange. Visionary landscapes and scenes with figures alternate with images of devils, goblins and ghosts, and he was also obsessed with depicting sado-masochistic scenes and arcane rituals.

A retrospective exhibition in 1988 at England & Co led to the acquisition by the British Museum of Bilbo's ink drawings for his book Out of My Mind. A second exhibition, Jack Bilbo & the Moderns: The Modern Art Gallery 1941-48, was also curated by Jane England at England & Co in 1990, when Bilbo's own works were hung alongside those of some of his artists, re-creating his own gallery. Bilbo's work was also included in the exhibition Obsessive Visions: Art Outside the Mainstream at England & Co Gallery in 2001. 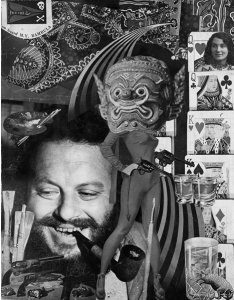