In 2006, Dan Fern had a solo exhibition at England & Co which was accompanied by the publication by the gallery of the book Dan Fern - Walks with Colour: Recent Works on Paper, edited by Rick Poyner.

The following is an extract from Rick Poyner's text:

'In 2000, Dan Fern bought a house and studio in Die, a small town in the Vercors, a national park to the south of Grenoble in south-east France. He has undertaken many walks and climbs in the area: in Diois, the valley of the River Drôme centered on Die; in Valcroissant, a wooded valley dominated by limestone cliffs that mark the southern edge of the Vercors plateau; and on the mountain of Glandasse, which towers over the valley of the Drôme from Die to Châtillon-en-Diois. Fern's reaction to this landscape was so powerful that it became the subject of his work. Some of the sets, Diois, Glandasse, Benevise and Toussière, refer to the area directly, but most draw on it in some way, taking their inspiration from the quality of light and the colour of the rocks and earth and sky seen on his outings. Increasingly, for Fern, there was a necessary relationship between the physical effort required by long days in the mountains and sometimes precarious climbing and the making of work in his studio through a process of distillation and meditation. Fern's latest work has a hard-won, concentrated simplicity. As a commercial image-maker, he has for many years produced abstract collages notable for delicate, musical relationships of line, colour and shape. His recent work displays an even more exacting and reductive treatment of form. The pictures trust in the power of a limited range of carefully considered elements to express the deepest intimations of what, for Fern, it means to be here in the world.

'He has always collected old maps and in his studio he has piles of Ordnance Survey maps, Bartholomew's half-inch contoured maps from the 1930's, Institut Géographique National walking and climbing maps of France, and rare Cartes géologiques générales de France from the late 19th century. The maps are mounted on cloth and the woven texture of the linen backs is cool and satisfying to the touch. Some of them became his raw material. Sometimes Fern works on a large section, treating the reverse side, with its pattern of folds, as a ready-made grid. More often in the new pieces, he breaks the maps down into their individual rectangular sections. The linen surfaces are perfect for flat planes of colour. Fern covers them with acrylic paint and then brings them together in different combinations, using colour to compose the pieces, which often take the form of a vertically-arranged triptych. When the arrangement is satisfactory, he mounts the sections on paper, usually assembling them as sets. A single, coloured thread, glued carefully in position, bisects some of the pictures. Other threads coil and unfurl across the surface with a calligraphic energy that suggests not only writing, but tracks, trails and ropes used for climbing. Edges are left suggestively unfinished, and the sense that this is paper is never lost. For Fern, trapping and concealing a mass of printed information, which is often lovely in its own right, is a radical act of editing. "The reverse seems somehow so much more potent and void because of the lushness and complexity of the hidden surface," he writes in a notebook. In other images, he has painted on the printed map surface and the muted details of the landscape can be discerned through veils of colour.' 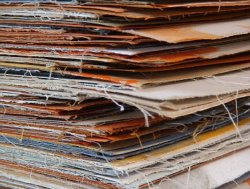