Heinz Henghes' adventurous life began when at 17 he left his birthplace of Hamburg as a stowaway on a ship to America. He lived and worked there until 1932 when he returned to Europe and spent time in France, Italy and Switzerland before moving to England in 1937. He was interned at the outbreak of war and sent to Australia with other German-born artists, writers and musicians on the notorious ship the Dunera, although he returned to Britain in 1941. Apart from a decade in the Dordogne from the early 1950s and regular summers at the studio and house he established there, Henghes made England his home until he retired to France in the early 1970s.

In 1930s New York, Henghes had become part of a circle of artists and poets including Max Ernst, Man Ray, and the sculptor Isamu Noguchi whose influence led Henghes to experiment in sculpture. Henghes exhibited in New York before leaving for Europe where he briefly assisted Brancusi in Paris. He went on to Rapallo at the invitation of Ezra Pound who paid for Henghes' first opportunity to work with a block of Carrara marble - Pound owned works by Gaudier-Brzeska, a significant influence on Henghes, who was described in the early 1930s as the 'new Gaudier'.

Henghes exhibited in Milan and carried out sculpture commissions before moving to Paris where he met Henry Miller, Jean Genet, Lawrence Durrell, Yves Tanguy and Anaïs Nin (Henghes' affair with Anaïs Nin in the late 1930s is described in her journals). Henghes left for England in 1937 where he took a studio in London and met Barbara Hepworth, Ben Nicholson, Alexander Calder, Naum Gabo, and Herbert Read. In 1939 Henghes' work was featured in the London Bulletin alongside major sculptors of the day, and he exhibited in Peggy Guggenheim's gallery in Cork Street.

After the war Henghes exhibited in the Sculpture in the Home exhibitions and taught at the Royal College of Art under Frank Dobson. Henghes was friendly with Jacob Epstein around this time, and Epstein's influence is evidenced in the large marble Madonna and Child that Henghes made for a London church. In the 1950s Henghes exhibited in the open air exhibitions of leading sculptors in Battersea Park, in the Unknown Political Prisoner Competition, and in the Festival of Britain, where his Orpheus was displayed in the centre of a lake. Henghes moved to the Dordogne in 1953 before returning to England to take up the post of Head of Fine Art at Winchester School of Art.

Henghes work is always distinctive, but his materials and approach changed through the decades. As Theo Crosby wrote in 1972, in all Henghes' sculptures 'there remains the preoccupation with sensuality, with the wonderful ambiguity of the human figure, with the translation of sensibility into image'. Henghes is represented in several permanent collections including the Museum of Modern Art New York, the Wakefield Art Museum, and the Royal Academy Collection, London. His archive has recently been acquired by the Henry Moore Institute in Leeds.

In 2006, England & Co held Heinz Henghes (1906-1997): A Retrospective, which brought together sculpture and works on paper. The Department of Prints and Drawings at the British Museum has acquired several works from this exhibition.

Further information about the artist can be found on the website www.henghes.org 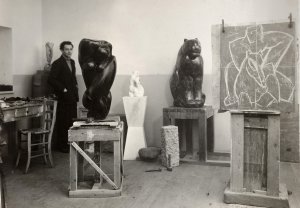 The artist in his Milan studio in 1936