Born in London in 1911, to an English mother and Italian father, Arthur Giardelli has lived and worked in Wales for more than fifty years. A friend of Cedric Morris, David Jones, Josef Herman and Ceri Richards, he has been a key figure in the influential 56 Group Wales, arranging exhibitions and showing throughout Europe. Giardelli's work is in many private and public collections including Tate and the National Museum of Wales.

Giardelli's constructions and reliefs show great originality. His work incorporates elements of Surrealism, Constructivism, Cubism, and his own form of organic abstraction. He has always used found objects, especially shells and weathered wood collected on Pembrokeshire beaches. Many of his works are about the sea, about the tides and waves, the shells found on the beach and the shapes of rocks. Other works absorb remnants of old watches, furniture and torn paper. Giardelli often uses pages from old books, partly because of the archival quality of the rag-paper, and also because he favours the element of chance that comes from a fragment of text being out of its usual context. He works slowly; many of the constructions will have taken up to three months to complete. He regards them as a form of sculpture, even when working solely with paper.

Rhythm is an important element in his constructions as he has always been interested in exploring the links between art and music. His work shows evidence of his encompassing knowledge of European art and culture and his influences are often from literature. In some works there is a coincidental affinity with the work of Joseph Cornell. Giardelli is fascinated by 'the mystery of time and the notion of eternity', and his constructions have a timeless, often almost nostalgic quality.

Giardelli's retrospective exhibition of his constructions and relief sculptures, held at England & Co in 2001, launched the book Arthur Giardelli: Paintings, Constructions, Relief Sculptures - Conversations with Derek Shiel. In this book, Giardelli discussed his painting and relief-making and reflected on the underlying influences and philosophies which inform his work. The book reveals how his childhood in the country shaped his life and examines his Italian background, his education at Oxford, his relocation to Wales, and his international circle of artist friends.

John Russell Taylor, reviewing the retrospective exhibition in The Times, wrote that many of Giardelli's 'characteristic relief paintings and sculptures are closely tied up with the sea, incorporating pebbles, shells and other found objects of the shore... Others deal with the detritus of industrial society, using odds and ends of old watch mechanisms, bits of wrecked furniture and torn paper. A third aspect of his art is concerned with literature, and his fascination with the arbitrary, almost surreal, verbal effects when pages from books are placed with seeming randomness in his works. Poised somewhere between the knowingness of a Schwitters collage and the romantic melancholy of Paul Nash's seaside surrealism, with at least an incidental nod to Joseph Cornell's magical boxes, Giardelli yet manages to make his own statement.' 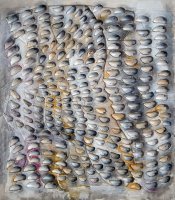