Mateusz Fahrenholz was born and educated in Scotland where he studied at Grey's School of Art, Aberdeen. He has won many awards, including two from the Prince's Trust, and has undertaken residencies in Scotland, Poland and the Netherlands. He has exhibited in solo and group exhibitions throughout Europe. He has held two solo exhibitions with England & Co, and he has taken part in numerous group exhibitions.

Fahrenholz's parents were Polish exiles who brought him up immersed in the language and ethics of Polish culture and this personal Polish background is one of the major creative forces in his work. Paul Crowther has described how Fahrenholz's imagery is 'readily accessible - exile and its consequences are universal elements in the human condition... The recurrent image of the crossing of the ocean draws on familiar symbolic connotations of distance and displacement, danger and passage.'

Fahrenholz's works have moved away from the deliberate illusion of age that permeated his early constructions to a more formal and minimal presentation that 'strips down' their actual physical appearance. He often uses and incorporates old 'found' photographs in his constructions, and specific photographs are central to the composition and interpretation of his narratives. Much of his work features images of unknown people and places, mostly from Poland or eastern Europe, but recently the photographs he has been using are mainly more abstract. He has been removing the main object or topic depicted, often ships and liners at sea, and instead using segments of the photographs, particularly varied images of horizons. These horizons become symbols of movement without destination, placing the viewer in the position of an exile or traveller.

For the past few years Fahrenholz has been living and working in Poland.

Between Exile and Memory: Edited from an essay by Dr Paul Crowther.

Mateusz Fahrenholz was born in Scotland, but his parents were Polish exiles and he was brought up in the language and ethos of Polish culture. This personal context is one of the major creative forces in his work.

Fahrenholz's imagery is readily accessible - exile and its consequences are universal elements in the human condition, and the Polish experience itself has become a living and potent symbol of suffering, displacement, danger and passage.

The key structural element in Fahrenholz's boxes is his use of old photographs. Fahrenholz uses images of unknown persons and places, mostly from Polish or East European sources. Photography provides the 'realist' dimension through which most viewers approach his work, and he uses specific photographs as central to the composition and interpretation of his narratives.

Many of his box-structures have the appearance of being constructed from 'old or found' material. He paints or treats his surfaces to give the appearance of being old. Recurrent elements in his boxes include a range of items with domestic associations, such as candles, bread, or milk bottles. These items all appear to have aged. The candles have been steeped in salt water, the bread has dried out and the milk bottles have been wrapped. No matter how mundane an item, personal and historical circumstance can render it precious and worthy of preservation.

What is most distinctive about Fahrenholz's work is his capacity to draw on something that is not readily accessible to conscious understanding: The structure and function of memory itself. We imagine memory to be a kind of retrieval facility which sorts through well-defined sedimented images of the past and sets them out for present attention. However, the content of memory is not exact. Our personal past is always to some degree alien, by virtue of the fact that it will never return. In looking back at the past on the basis of the present we try to find a meaning, a redemptive narrative, a life-story, over and above mere chronological succession. In striving to comprehend a culture and history, Fahrenholz echoes our relation to memory, and achieves such redemptive narratives.

Other artists have explored this general area in recent years. Anselm Kiefer, for example, has explored the catastrophic dimensions of German experience in a succession of massive paintings and multi-media works. Fahrenholz is much more modest in his aspirations and means of realisation. Yet this is precisely his strength. Kiefer's works sometimes seem to celebrate those very forces of destruction which they are meant to indict. Fahrenholz explores themes of suffering and dislocation at precisely the personal level at which such things really matter. This exploration leads to works of sombre faded beauty which refract and redeem the individual's relation to the past. 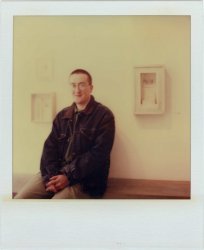 Mateusz Fahrenholz at his exhibition
at England & Co in 1995