Stephen Harper was born in Northern Ireland in 1954 and studied at Ulster College of Art & Design, Bath Academy of Art and Liverpool Polytechnic, before completing his MA at Goldsmiths College in London. Since 1975, he has been represented in exhibitions in Ireland, America, Germany and Britain, including the Serpentine Gallery Summer Show 2; the Stadtische Gallery, Regensberg; Museé Imaginaire at the Museum of Installation, London, and several exhibitions organised by the Arts Council Belfast. His most recent exhibition was at England & Co in April 2007 and he has participated in numerous exhibitions with the gallery over the past twelve years.

Stephen Harper is a contemporary master of the still-life genre: his intensely observed and meticulously painted still-lifes are compelling with their subtle psychological intensity. Most of the paintings are deliberately minimal and painted with a virtuoso technique that makes the spectator confuse what is actually a painted surface with a quasi-Surrealist reality. There is a frisson in the way that elegantly creased and crushed sheets of paper are concrete yet playful, dancing in a spare, empty space or void; or in the way that lustrous pearls counterpoint gleaming satin in a sensual yet emblematic way.

Harper says that his main intention is to acknowledge 'the inherent dignity and strangeness of the physical world beyond any meanings we can ascribe to it.' The objects act as symbols of the 'real', as metaphors for the existence of anything: as the Italian master of the still-life genre, Giorgio Morandi, once wrote, 'nothing can be more abstract, more unreal than what we actually see'. Harper's working process also involves prolonged close attention to simple groups of objects, and he says that during this meditative period, 'the objects appear to acquire meaning and significance, both as themselves, and in their relationships to one another. The particular physical facts of the objects are examined but also their potential metaphorical or symbolic significance... The intention is not to impose meaning but to examine and use it as it occurs. Paradoxically, the more meaning the objects appear to acquire, the more intense their material existence appears to become.' 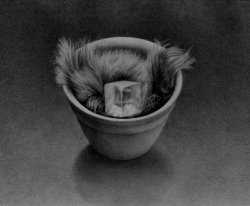