Peter Bunting was born in 1947 and spent the first twenty years of his life in Switzerland, Turkey, Scotland and Peru, later travelling to the Middle East, India and West Africa. In 1962 he came across the work of Yves Tanguy and began a long involvement with Surrealist art and ideas. He graduated in Philosophy from Cambridge University and subsequently studied at the Byam Shaw School of Art London.

In the mid-1970s, Bunting lived and worked on the North Yorkshire coast, producing drawings and paintings dealing with growth and natural forces. He has made drawings from nature for many years, and these have particularly informed his landscape-based works. He says that 'the space in any particular painting can vary enormously depending upon how the forms are understood... we can oscillate between the very small and very large held in the same frame.' His paintings may remind people of something, but he would see that as circumstantial rather than intrinsic, although many of his paintings fulfil more easily the criteria of being representational. He says that 'to me what is fundamental about each thing or moment is that it is unique, so I personally get closest to this fact, not by re-producing, but by producing something undefined each time'.

Most of the paintings have developed through a process of slow improvisation that acknowledges that 'the world we inhabit, also incorporating our thoughts and feelings, is continually being transformed'. The themes and forms emerge through a kind of internal requirement and so the subject often only makes its appearance slowly. A decision about the orientation of the painting itself is sometimes delayed until the end, as he mostly works from all sides and with the picture lying flat. Bunting says that 'things seem to take up new forms, or transform in an ordered way whatever their size or origins, be it the movement of clouds, the erosion of land, people interacting, bodily systems or blood cells. If my paintings can be said to be about anything, they are about that ordering process.' Describing his way of working, Bunting points out that 'the activity of making a painting is itself an ordering process' and that 'a feeling for patterns' is something else that underlies his work. The recognition that pattern generates its own meaning is one of the things which he likes about the work of Adolf Wölfli and much Outsider Art. He feels that 'at all levels of existence, similarities of structure bind the extremes in a kind of pattern.' His painted surfaces are sometimes on the verge of abstraction, but  generic shapes, such as trees or leaves keep them descriptive. The resonance of Bunting's paintings comes from their very singularity: his visions of nature are not part of any specific genre, but are very much landscapes of his own  mind.

Some pictures are transcriptions from works by other artists, from photographs, and from icon paintings. With his icon painting transcriptions Bunting is interested in the way that icons 'seem to contain structurally a tremendous amount of compressed imagery dealing with the theme of transformation.' He found himself 're-presenting this in more biological terms whilst keeping closely to the structure of the originals.' He reworks found images into landscape-like compositions in which centers of life grow in a network of connections. For much of 2006, he  worked on a series of transcriptions after Watteau. 'Watteau first interested me because of very particular moods which infuses his work, of a sense of impermanence and fragility; and I admire his particular ability to integrate a large number of figures dynamically into a landscape'. The painted circles and spots employed by Bunting in his transcriptions play a crucial role as a kind of common unit across the picture, and 'they help to both dematerialise the object and to act as an equalising tendency across the composition, like globules of light which work their way across the canvas nestling in groups, coalescing into objects or spreading out into available space. They continually bring the eye back to the surface pattern out of which deep space is constructed... The figures themselves (like many of the tree trunks) tend to be constructed out of more dynamic patches and lines which, unlike circles, lead the eye along complex directional pathways'. All that is solid melts into air is the title of a book by Marshall Berman subtitled The Experience of Modernity which is a quote from the Communist Manifesto of 1848. 'These particular paintings are analytical in approach, and the feelings and thoughts they may induce have a complex origin and reference, pertaining as they do both to Watteau and his pre-Revolutionary, pre-Enlightenment world and to our own post-modern one.'

Bunting has exhibited in group exhibitions with England & Co since 1997, with a solo exhibition, Paintings from the New World, in 2003. A group of his recent paintings were featured in a group exhibition at the gallery in September 2010. 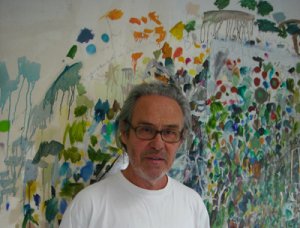