Pamela Bianco's career spanned eight decades, encompassing her beginnings as the precocious child artist hailed as a prodigy in 1918 and the early 1920s, through to her development into an American Modernist painter and printmaker in the later 1920s and 1930s, culminating in her final works - the obsessive and meticulously detailed paintings she made in New York in the 1960s.

A decade after she died in New York, England & Co held the first retrospective exhibition of her work in December 2005. The exhibition included a substantial group of the delicate early drawings and illustrations that made her famous as a young girl. Also shown were paintings made in London and Wales in the 1920s; paintings of rural America made in Connecticut and Maine during the 1920s and '30s, plus New York city paintings from the same period; Modernist lithographs from the 1930s; stylised flower paintings and sleek portraits from the 1930s and '40s; some of highly finished surreal paintings made in the 1960s. 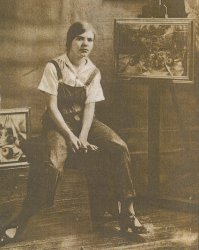