A monograph about the artist, Monica Ross: Ethical Actions, A Critical Fine Art Practice has recently been published by Sternberg Press.

Solo, collective and multilingual recitations from memory of the Universal Declaration of Human Rights.
Archive image

Ghost in the Spinning Mill 1985

Ghost in the Spinning Mill 1985 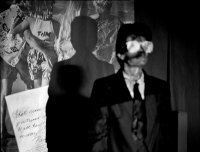