John Aldus (born Geneva, 1940 as Gérald Ducimetière) was a French/Swiss sculptor, painter, photographer and multimedia artist. After graduating from the Ecole des Art Decoratifs and the Ecole des Beaux-Arts in Switzerland in 1961, he was awarded several prestigious scholarships and had his first museum exhibition in 1965 at the Museé Rath, Geneva. He had numerous international exhibitions over the past five decades since, initially under his original name of Ducimetière. In 1994, he changed his name to John Aldus, took French citizenship and moved to London, where he lived and worked until his death in January 2022.

Aldus had worked as an architectural draughtsman, graphic designer, and theatre and film stage designer, and occasionally as a visiting professor. He stated that he was "engaged in examining the role of art and its mechanisms in contemporary society". This questioning of the role of art in the community is reflected in the installations he created for public spaces in Switzerland and elsewhere in Europe, where his intention was "to re-inject the idea of art in the collectivity". 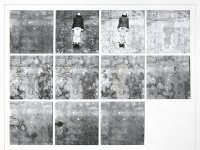