Jeremy Moon (1934-1973) was a British abstract painter who emerged onto the London art scene in the early 1960s and became known for his geometric paintings.

Moon read law at Cambridge University and worked in advertising before becoming an artist in 1961. He taught sculpture at St Martin's School of Art and painting at Chelsea School of Art; he exhibited extensively within the United Kingdom and internationally. He lived and worked in Surrey from 1966 to 1973, when he died following a motorcycle accident at the age of 39. 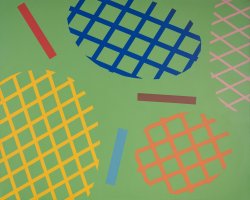