Denis Masi is an experimental artist who has worked for more than four decades across a broad range of different media including assemblage, sculpture, installation, film, video, performance, photography, print, drawing and painting.

In the catalogue for Masi's 1996 survey exhibition at Culturgest in Lisbon, Marco Livingstone wrote: "Since the 1970s Denis Masi has devoted his art to an investigation of the many ways in which power, particularly institutionalised authority, manifests itself as a dehumanising, negative force that controls our lives and circumscribes our imagined freedoms. It is this preoccupation, rather than any purely aesthetic aim, that gives coherence to an artistic production that has encompassed a wide range …." The first phase of Masi's development began "with a psychological investigation of the exercise of power on a subliminal level".

Masi studied at Seton Hall University, N.J. USA; Brera Academy of Fine Art, Milan, Italy; Slade School of Fine Art; and Chelsea School of Art, London. He was the first artist in residence at the Imperial War Museum (1984); Sargent Fellow at the British School at Rome (2003); and has held residences in Morocco, Bulgaria and Iceland. He has completed public and corporate commissions, as well as designs for the theatre, had numerous solo exhibitions since 1965, and had an extensive academic career from 1968 until 2009. In 2017, Masi was included in This Way Out of England: Gallery House in Retrospect at Raven Row, London, and will be exhibiting works from the late 1960s and early 1970s with England & Co at Photo London, Somerset House, in May 2019.

Since 2000, Masi has exhibited large-scale photographic works related to his interest in social power as experienced at public events and festivals. He currently lives and works in London and southern France. 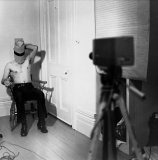 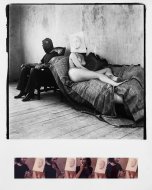