James Burbidge is a British artist born in Wiltshire in 1959. A sculptor who makes enigmatic objects, he is known paricularly for his lead-covered boxed tableaux, 'like tiny universes, surreal and poetic'. He has exhibited in Britain and Europe, most recently at the Art Nuova Icona, Venice, and began to exhibit with England & Co in 1991, taking part in in several of the gallery's exhibition series Art in Boxes. He had a solo exhibition with England & Co in 1992, and has since been included in numerous gallery exhibitions such as The Map Is not the Territory iii in 2003 and Four Artists in 2005.

Burbidge's series The Way Things Are are groups of forms made using a simple system of repeated actions. These are un-named, mysterious objects 'whose function and meaning is yet to be discovered'. A group from this series was included in the 2008 exhibition at England & Co, Is there anybody out there? 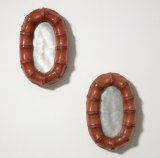