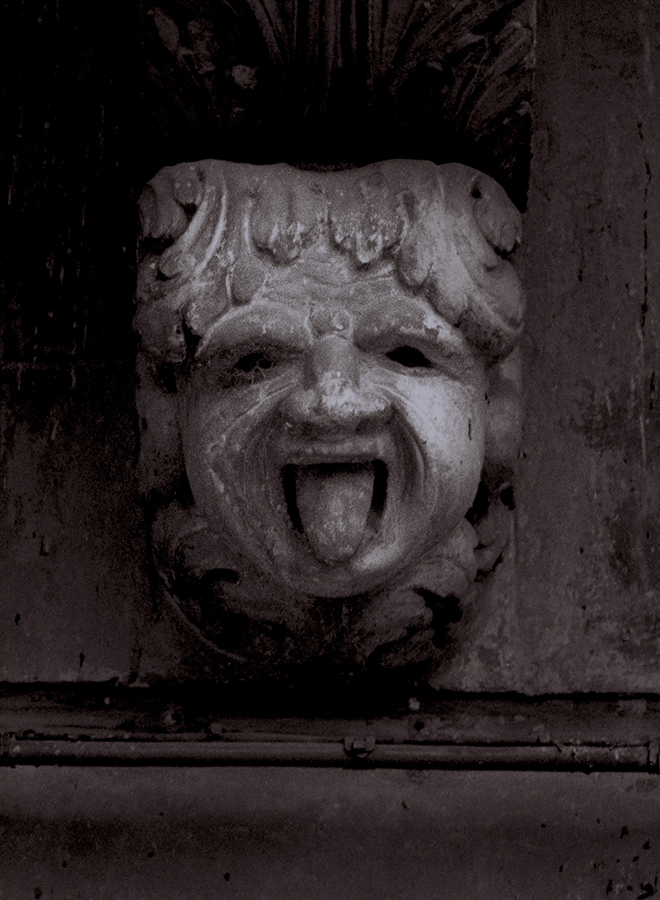 Altered States (Mental States of Being)
– a project by Iraida Icaza

An earthquake in 1693 severely damaged a number of towns in Sicily. The tremor struck mainly the south-east of the island and devastated the cities of Catania, Ragusa, Siracusa, Modica and Palazzolo. The subsequent years of reconstruction brought with them an architectural revival as palaces and churches were rebuilt with architectural and artistic vigor in a style that was a fusion of Gothic and Islamic traditions .

The decorative façades, balconies and window frames that enrich these palaces became emblematic of that period known as Sicilian Baroque. They include wild apotropaic carvings of masks and grimaces.* Their grotesqueness has captured the existential fear and derangement in the face of catastrophe. Their decorative symbolism was evidently intended to depict as well as help to overcome the horror and pain suffered by the population.

Icaza discovered these stone heads during one of her travels in Sicily. Created in the early 17th century, these grotesque faces seem to be distorted by greed, obsession and madness. “My images are a personal interpretation of these strange masterpieces. In my project Altered States (Mental States of Being), I suggest that these ornamental façades are historical evidence of a specific collective psychological state of the past, relevant also to our present human condition. Altered States is a series composed of 27 heads, each depicting different states of being. These faces of the past seem to mirror the human condition, alienation as well as possible transformation.”

* The adjective apotropaic (Greek αποτρέπειν) means to avert or banish. Doors and windows were considered vulnerable, entrances of bad luck and evil. Monstrous faces with horns and long tongues were considered to ward off evil spirits and spells.