The work of Maliheh Afnan transcends and absorbs cultural references. Born in Palestine of Persian parents, educated in Beirut and Washington, she lived in Paris for more than twenty years before moving to London. Afnan had two solo exhibitions with England & Co, and her work is represented in the Institute du Monde Arabe in Paris and in the British Museum in London, where in 2006 she was included in the exhibition Word into Art: Artists of the Modern Middle East.

Afnan travelled extensively in America, the Middle East and Europe. Her work has been described as appearing 'as a relic of an older civilization or an archaeological excavation into the collective psyche... The delicacy of Persian miniatures and manuscripts, which she remembers from childhood, is mirrored in her love for intimate scale and the refined beauty of muted colour.'

Calligraphy plays an important role: images appear that suggest the written word. Her works on paper and her tablets of painted plaster are reminiscent of ancient, almost obliterated texts, and like palimpsests, retain only some vestige of literal meaning and an impression of human contact.

Afnan absorbed both Middle Eastern and Western influences. She looked towards such artists as Pollock, Rothko, Dubuffet and Klee, and shared an affinity with the American artist Mark Tobey, who helped to arrange the first European exhibition of her work in 1971.

She said that 'my work is rooted in memory, both my own and a more distant, perhaps collective one. I unconsciously but continually refer to places, scripts, faces from the past both real and imagined... On a sheet of paper placed flat on my work table, I start with a line. That line leads one on, taking a life of its own, making me a mere instrument of its journey.

'Often the source of these lines stem from scripts - scripts of all kinds, even invented ones... At times landscapes emerge instead, or faces. In a way I find I "write" my painting. I add pigment, layer over layer, which I rub in with my fingers, working it until it assumes its patina. If all of one's life is registered in the recesses of the unconscious, then one's work might simply be an unravelling, filtered and transformed through time and the need to give it form... the process eludes me, and retains its mystery.' 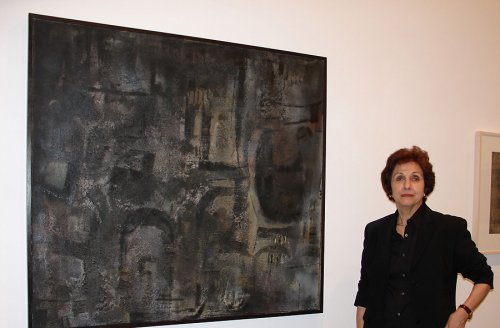 The artist at her solo exhibition at England & Co in 2006