Elisabetta Catamo was born in Rome, where she currently lives and works. Since 1979, she has had more than 20 solo exhibitions in Italy, Japan and Britain and her works have been included in more than 65 group exhibitions worldwide; in 2003 she was one of the artists chosen to represent Italy at the 9th Cairo Biennale.

After studying at the Academy of Fine Arts in Rome, Catamo first became known in the 1970s and '80s as a photographer of intensely coloured, surreal tableaux of juxtaposed objects. The theatrical settings she used in her photographs evolved into 'mini theatres' contained in boxes.

Her more recent architectural constructions fall somewhere between sculpture and painting. Her work has developed into wall-mounted constructions of wood covered in graphite: many of these constructions use formal architectural elements or have textured monochrome surfaces studded with nails. Some are circular, reminiscent of tribal shields, others are based on plant forms. One group of works based on clothing are formalized garment structures drawn from traditional costume and clothing of countries such as Japan, China and Egypt which are refined and reduced to archetypal shapes.

Many of Catamo's works utilise coloured feathers, textiles, nails and found objects that create strangely beautiful diversions from the austere graphite surfaces. Often objects are inserted and set into the constructions like archaeological 'finds' - Catamo uses them as signals and hints of what she says is 'something else': meditative and poetic qualities are combined with the pleasure she takes in the decorative and dramatic aspects of her work. Italian critic and author Enrico Crispolti wrote that Catamo's works can lead the viewer to slide into another dimension: 'a state of evocative and contemplative suspension'. He noted in her works a quality of 'silence' and an atmosphere 'verging at times on the metaphysical, with roots stretching all the way back to de Chirico.' 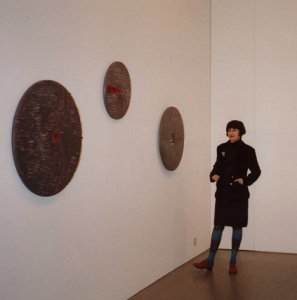 The artist at her exhibition at England & Co in 2004