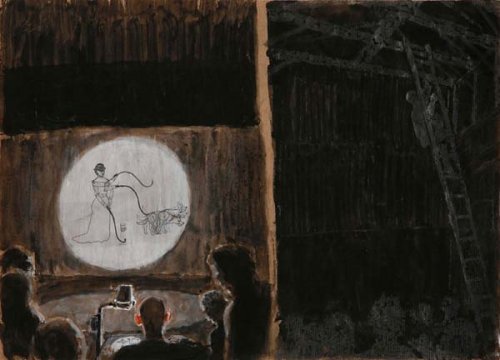 In March 2004, the international London-born PAC began a two-year long itinerary using the 'Private Theatre' case history of Anna O (in Joseph Breuer/Sigmund Freud’s Studies On Hysteria) as a literary inspiration. An interdisciplinary troupe, drawn from eight countries across three continents, used elements of aerial, mime, voice and projection, fire, shadow, and object manipulation to create an evolving repertoire of acts variously choreographed for a range of sites, situations and contexts in London, Paris and Zagreb.

PAC Live Movie #3: Dog Whip refers to the scene described by Breuer, where a spirited Anna chases away a dog that had spilled water. Reverse Ladder: my only ever aerial act consists of climbing up and down the overhanging rear side of a tall creaking aluminium ladder in virtually complete darkness.