John Dugger was born in 1948, in Los Angeles. He studied in Chicago before arriving in Europe in 1967, where he became part of the London avant-garde. He created participatory art events in London, working and exhibiting with artists such as David Medalla, Lygia Clark and Helio Oiticica; and designed a pavilion for Documenta 5 at the invitation of Harold Szeeman.

In the 1970s, influenced by his travels in China and Asia and his passion for mountaineering, Dugger's practice shifted away from participation art towards banner making. His banners have been commissioned by the Dalai Lama and the House of Commons and are in many public collections, including Tate, London. In  2007, he exhibited drawings and Expeditionary Mountain Banners at England & Co. Two of his early banner works were exhibited recently at the Antwerp Museum of Contemporary Art. The exhibition This Could Happen to You: Ikon in the 1970s, which includes works by John Dugger, was held recently at the Ikon Gallery, Birmingham.

The exhibition at England & Co in 2010: John Dugger: Ergonic Messenger focused on his works and projects from the 1970s and was accompanied by a 36-page illustrated catalogue that includes an essay by Guy Brett.

In June 2012, John Dugger exhibited with England & Co at Pinta: The Latin American Art Fair in London, where his large Chile Vencera! banner - first hung in Trafalgar Square in 1974 - was on display in the main exhibition space. In July 2012, his Sports Banner from 1980 was featured as Tate's 'Work of the Week' to coincide with the opening of London's Olympic Games. 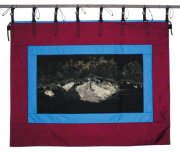