Chris Kenny (b.1959)
Kenny produces poetry using collections of found text in three-dimensional collage-constructions. Text fragments, culled from discarded books and sorted into categories, are mounted on pins and fastidiously composed in white glazed cases. The materiality of the strips of words, the differing shades of ageing paper and the shadows cast, add a discreet aesthetic to the minimalist presentation. Andrew Spira, has written that ‘one can begin at any point in these works, and experience sorrow, pity, inward smiles, out-loud laughter… and come away with a coherent sense of meaning and pathos.’ 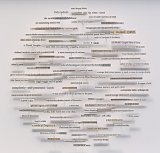 Liliane Lijn (b.1939)
Liliane Lijn’s friendships with writers in Paris and New York first led her in the 1960s to experiment with the written word and to collaborate with poets in her first Poem Machines and Poem Cones. These kinetic works make words revolve at speed: Lijn states that ‘the word accelerated loses its identity and becomes a pattern pregnant with… the energy of its potential meaning should it once again become a word.’ In her book Crossing Map the drawings interweave with the text, and Lijn ‘uses language as a mirror for our culture, avoiding the use of nouns and punctuation, and inventing a new prose structure’.

Arthur Giardelli (b.1911)
Arthur Giardelli has been making reliefs and constructions since the late 1940s: John Russell Taylor, writing in The Times in 2001, described how one aspect of Giardelli’s art ‘is concerned with literature and his fascination with the arbitrary, almost surreal, verbal effects when pages from books are placed with seeming randomness in his works…’. His constructions are ‘poised somewhere between the knowingness of a Schwitters’ collage and the romantic melancholy of Paul Nash’s seaside surrealism, with at least an incidental nod to Joseph Cornell.’

Vito Drago (b.1973)
Vito Drago’s cased book-collage-constructions are the result of his long obsession with books. He has always stressed that the books he uses and manipulates in his work are ‘non-specific’, saying that ‘it is not the message of a particular book that interests me… there is no element of interpretation’, Drago takes the perception of books being representative of ‘knowledge’, and subverts and questions the certainty of that concept in his altered book-works through deletion and obliteration – the content is irrelevant. He asks: ‘what do we really know?’

Rupert Spira (b.1960)
Rupert Spira combines ceramic vessels with poetic texts – the words explore the nature of consciousness: this exploration is a subtle and elusive undertaking and the effort to read the words should reflect this. To begin with perhaps just a few words will be clear… like finding the corners of a vast jigsaw puzzle. At each look a few more phrases will appear and the character of the poem will begin to emerge. However the content of the poem, like its subject matter, will always remain difficult to grasp. The process of exploring it should be fascinating but frustrating, drawing the viewer into the bowl on one level and into the meaning of the words on another. 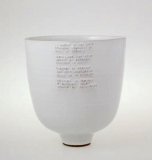 Georgia Russell (b.1974)
Georgia Russell cuts and transforms ephemera: books, music scores, newspapers, maps and photographs. She sees books as sculptural objects with an inherent history, representing ‘the hands which have held them and the minds they have passed through’. She uses a scalpel to dissect and flay the pages of her chosen books, her intention being to give them ‘a new life and new meaning’. The resulting works hover between object and image, and she somehow manages to retain and reclaim the past life of an object as much as her techniques attack it. 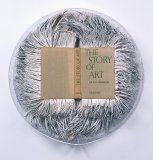