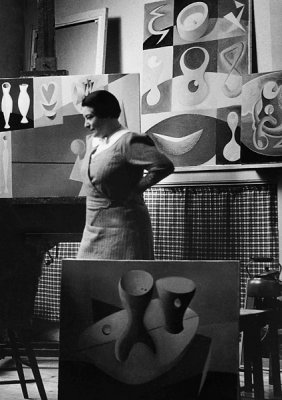 We are holding a private view and film screening as part of the Fitzrovia Lates programme. Please join us for this event on Thursday 29 November, 6–8.30 pm

In 1926, the British artist Marjorie Watson-Williams moved to Paris, where she adopted the name ‘Paule Vézelay’. By the early 1930s, she had become an active member of the Parisian avant-garde.

In France, Vézelay lived for some years with the Surrealist artist André Masson, and mixed with many of the most significant artists of pre-war Paris including Kandinsky, Mondrian, Miro, Magnelli, and her close friends, Jean Arp and his wife Sophie Tauber-Arp.

In 1934, Vézelay was invited to join the group Abstraction-Création and exhibited in several significant pioneering exhibitions of non-figurative art in France, Italy and Holland. Abstraction-Création was an association of artists formed in Paris in 1931 to advocate abstract art and promote formal purity and non-objectivity. Although the association eventually grew to include over 400 member artists, initially about 40 artists with varied ideas and practices were involved, including Piet Mondrian, Jean Arp, Marlow Moss, Naum Gabo, Barbara Hepworth, Ben Nicholson, Kurt Schwitters, Wassily Kandinsky, and Paule Vézelay.

Le Groupe Espace was an association of geometric abstract artists and architects founded in Paris in October 1951, with a manifesto issued in 1953. The artists of Le Groupe Espace were concerned with space in art and were influenced by the pre-war movements of Constructivism and Neo-Plasticism. Vézelay exhibited with them, and became president of a British branch of Le Groupe Espace.

Her friend the British artist Paul Nash, writing in 1936, stated that Vézelay had ‘contributed steadily to the modern movement’. Her early work was figurative, but apart from her Surrealist-inspired works from the early 1930s, and her wartime drawings, she became one of the first British artists to commit to the abstract movement.

Vézelay lived in France until forced by the war to return to England in 1939. She continued to exhibit regularly in France after the war, although in England, living in London, she almost disappeared from public view until the Tate Gallery retrospective exhibition of her work in 1983, held the year before she died.

Her reputation as ‘an innovator in non-figurative art’ had been noted by the critic William Lipke in 1965, and her series of thread and wire constructions, the Lines in Space that she began in 1935, had already been acknowledged as ‘a completely original and independent conception’. The first work from her series of Lines in Space will be included in this exhibition, together with some early Surrealist works that preceded her commitment to pure abstraction, and abstract paintings, collages and drawings spanning the mid 1930s to the 1970s.

Vézelay’s work is represented in museums and public collections in Britain and abroad including Tate; the British Museum; the Imperial War Museum; the National Portrait Gallery, London; the Victoria and Albert Museum; the Ashmolean Museum, Oxford; the Kunst Museum, Basel; the Australian National Gallery; and the Arts Council of Great Britain.

Works by Vézelay are currently on view in collection displays at Tate Modern (Poetry and Dream), and at the Henry Moore Institute in Leeds (Natural Form: Shape and Form in sculpture).