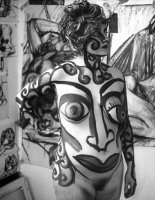 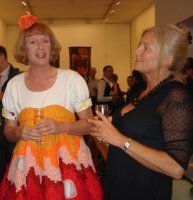 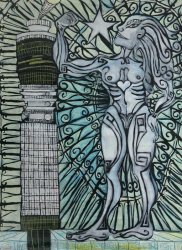 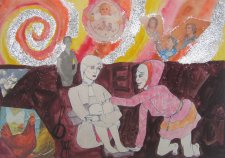 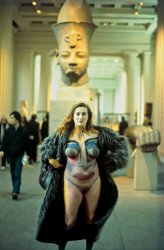 Flashing at the British
Museum, c1982 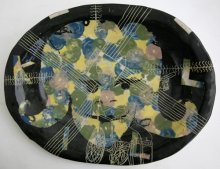 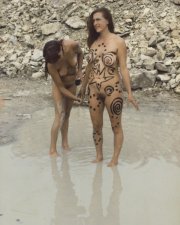 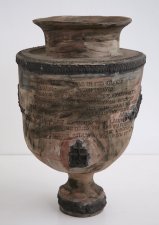 Grayson Perry: Life is terrible
in its glory, c1985

Introduction from the exhibition catalogue

This exhibition is a salute to a small, but memorably subversive group of artists who emerged in London at the beginning of the 1980s – only late last century, but a world away from the money and celebrity now associated with contemporary art. It is a celebration of a particular kind of anarchic innocence and deliberate primitivism that formed an exuberant response to life in Margaret Thatcher’s Britain.The recent ICA exhibition, The Secret Public, exposed aspects of the parallel underground scene that co-existed with the rather elitist art world of the early and mid-1980s. In this other art scene, artists ranged from those who made overt political reactions to Thatcherism, to those who were part of a social sub-culture, following an alternative lifestyle of living in squats, devising provocative fashions, dressing up to go to nightclubs such as Heaven, Taboo and The Blitz, and associating with the avant-garde gay scene that evolved around key figures like film-maker and artist Derek Jarman, dancer and choreographer Michael Clark and the flamboyantly outrageous performance artist Leigh Bowery.

The Neo Naturists were an integral part of that alternative scene, although with their often inadvertently hilarious brand of exhibitionism, they could also be regarded as an antidote to it. They combined ideas of ancient rituals with contemporary life, and were consciously unfashionable – it was a revival of the spirit of the 1960s. One of their founders, Christine Binnie, said that like the New Romantics and other club habitués, the Neo Naturists ‘were showing off, too’, but ‘were also about exposing the po-faced posing of it all’. In 1984, she stated: ‘I quite like the dangers of not being dangerous. In a way that’s more dangerous… Then perhaps we can do something which is more than just rebelling… I try to make sure everyone is having a nice time being involved. There’s no point in people doing it if they’re having a horrible time.’

In an era without e-mail or mobile phones and texting, news of Neo Naturist events was usually spread by word-of-mouth. The Neo Naturists seemed to pop up all over the place. Jennifer Binnie said at the time that ‘we do the same thing in a nightclub as in a gallery, but in a nightclub it’s called ‘‘cabaret’’, and in a gallery it’s called ‘‘performance art’’. I hate the seriousness of the art world, the way you’re not meant to do something just for fun.’

I first encountered the Neo Naturists when I saw some iconoclastic early ceramics by Grayson Perry and Jennifer Binnie’s wildly colourful paintings when visiting Timothy Prus (one of their earliest supporters) in his King’s Cross flat around 1983. Jennifer had also painted furniture for Timothy, including his television, with all-over spiral designs and arcane symbols – seen together with Grayson’s pots in Timothy’s dark,crammed-full-of-art flat, these were convincingly authentic contemporary-primitive British artefacts.

The private views for Grayson, Jennifer and Wilma Johnson’s exhibitions at James Birch’s gallery in the Kings Road in the mid-1980s were always chaotic good fun with their fellow Neo Naturists in attendance (these events are recalled in many of the memories of the Neo Naturists collected for this catalogue). It was at these gallery openings that Grayson occasionally appeared in wilfully dowdy dress as Claire (Grayson has described Claire at that time as ‘looking like an off-duty nurse or Avon lady’), often adding an acerbic note to leaven the post-hippie proceedings.

This exhibition includes works from the 1980s by the main protagonists: Jennifer and Wilma’s paintings; Grayson’s ceramics and collages; documentation and film of Christine’s performances and of group events. It is a real pleasure to be able to revisit that time again and be surrounded by the Neo Naturists’ wonderfully unconstrained spirit. 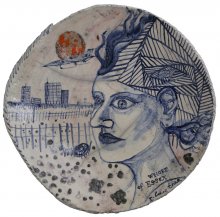 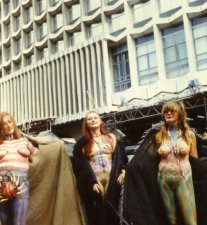 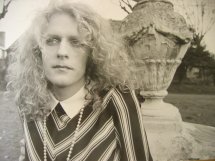 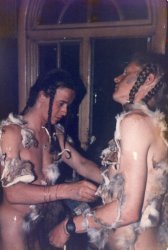 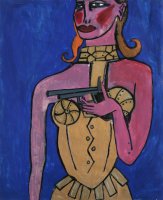 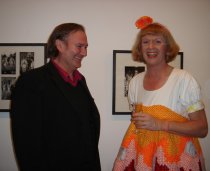 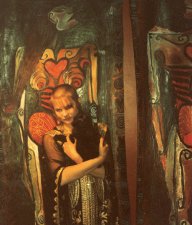 Jennifer Binnie with her
paintings Woman and Man, c1983 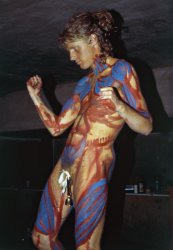