Damian LeBas (1963-2017) was born into an Irish traveller family. He made drawings compulsively from childhood and, after being encouraged to go to art school, he studied textiles at the Royal College of Art in London. LeBas continued to make drawings in pencil and oil pastel – often intensely autobiographical, sometimes using Romany dialect – and these have been included in exhibitions of Outsider Art in Britain, America, Japan, Sweden and Ireland.

LeBas became a leading exponent of the 'Roma Revolution' in art and described his work as 'Gypsy DADA'. His later drawings 'explored the claustrophobia experienced by nomads in modern European society by mixing cartography with an idiosyncratic tribal portraiture'. Works by LeBas were included in the exhibition Obsessive Visions: Art Outside the Mainstream at England & Co, and he was represented in the Prague Biennale 3 and in the Roma Pavilion at the Venice Biennale in 2007. 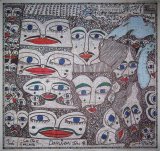