Anne Bean is a London-based artist who is an active and influential figure in UK live art and performance. Born in Northern Rhodesia (now Zambia) in 1950, she moved to England in 1969 after an initial art education at the University of Cape Town. She attended Reading University (graduated 1973), and her wide-ranging practice encompasses slide projections, drawing, photography, video and sound, with materials such as fire and pyrotechnics to weather balloons, wind and steam. Since 1970, she has presented solo and collaborative projects throughout Europe, USA, Africa, Mexico and Japan. In 2008, Bean was awarded the Legacy: Thinker in Residence award by Tate Research and the Live Art Development Agency. England & Co have exhibited her images relating to performance works from the 1970s at Photo London and Paris Photo. In June 2019, the gallery held a solo exhibition: Anne Bean: How Things Used to Be Now.

• Read the interview with Anne Bean in Fräulein magazine. 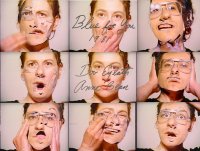 Stills from video which was originally edited in various ways to different lengths, the full version being 15'32". This version is 7'24".