Liliane Lijn was born in New York in 1939, educated in Europe and has lived in London since 1966. She is a leading pioneer and exponent of kinetic art who in her work has experimented with light, movement, words, film, liquids and industrial materials. Lijn has exhibited internationally and had a major retrospective exhibition in 2005 at the Mead Gallery, University of Warwick Arts Centre. In 2006, Lijn had a solo show at England & Co: Liliane Lijn: Selected Works 1959-1980 and was featured in the gallery's 2010 group exhibition Beneath the Radar in 1970s London and in Wandering Lines ii in 2012. An England & Co publication to accompany Lijn's exhibition was designed in homage to the newsbulletins produced by Signals gallery in London in the 1960s, and copies are available for sale from the gallery.

Lijn was recently short-listed for her design for the Fourth Plinth in Trafalgar Square.


Acquired from England & Co for the British Museum collection.


First of two drawings for a sculpture using wind to generate electricity and music for a small town. 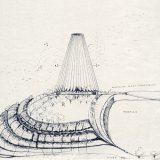 
Detail from the second drawing for a sculpture using wind to generate electricity and music for a small town.