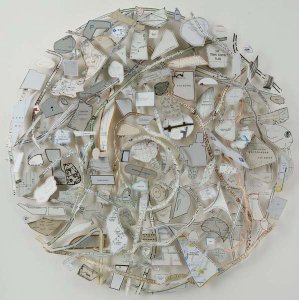 Chris Kenny’s three-dimensional collage-constructions have been described in a recent essay by Gabriel Coxhead as ‘witty, severe, paradoxical things, appearing at once rational and also deeply surreal’. There is an association with museum collections of cased specimens and scientific methodology, and as Coxhead points out, ‘it’s hard to think of anything more ephemeral, or more wonderful, than what Kenny collects – yet, at the same time, more utterly commonplace: words, snippets of sentences and odd turns of phrase, shapes lifted from maps and scientific diagrams – in short, different kinds of representation, the sort of quotidian signs and symbols that codify and communicate meaning.’

Many of these works are presented very precisely in an ordered manner, with objects or phrases mounted on pins. In his text works, Kenny subverts the meanings of these text fragments culled from discarded books: they are cut into strips and precisely mounted after being sorted into themes or categories such as ‘Facts’ or ‘Instructions’, or formed into new narratives or ‘Stories’ in a cut-up method reminiscent of both the Dadaists in the 1920s and the Beat poets of the 1960s. Alain de Botton has commented that ‘Kenny is a master at delicately excising something – a phrase, a leaf, a road in a map – from its normal setting, and settling it into a diminutive white museum where, hovering an inch or so above the base, it becomes free to release a hidden narrative or symbolic message.’

In Kenny’s map-works, he uses the colours of his materials in an almost painterly way, and says that he replaces ‘the cartographer’s logic with an absurd imaginative system. The roads float and interact in unlikely combinations that allow one’s mind to ricochet back and forth between disparate locations and associations.’ Motifs of roads, parks, lakes, dual carriageways, car parks and innumerable other routes and places are cut from maps from around the world, identified in numerous different languages. They are re-arranged in new configurations and raised like real-life spaghetti junctions. He intends that these re-workings of maps ‘chart the very nature of place itself, and suggest, by rendering the relationships between places arbitrary and meaningless, that there is only one place in the universe.’

The art historian, Andrew Spira has noted that ‘the geometrical and abstract appearance of Kenny’s works suggests that they belong to the pure and clear world of early modernism’: this is particularly apt when considering the discreet and elegant shades of white and grey in his text works; and is allied to Kenny’s aesthetic interest in the shadows cast by his mounted materials, and to his use of the basic constructivist materials of wood, glass, metal and paper.

This is Chris Kenny’s fifth solo exhibition at England & Co. He has participated in many of the gallery’s group exhibitions for over a decade, and exhibited with the gallery at numerous art fairs including Zoo in London (2009). Institutional and international exhibitions that have featured his work include Slash: Paper Under the Knife at the Museum of Art & Design, New York (2009-10); and House of Words at Dr Johnson’s House, London (2009). Kenny was recently represented by five works in Mappa Mundi at the Berardo Museum Foundation, Lisbon, Portugal (2010-11). His works have been reproduced in many magazines, exhibition catalogues, and recent books, including You Are Here and The Map As Art: Contemporary Artists Explore Cartography, both published by Princeton Architectural Press, USA. Public collections that have acquired his works in recent years include the Museum of London, the Victoria and Albert Museum, and the British Museum.

An illustrated monograph on the artist with essays by Gabriel Coxhead, Alain de Botton and Andrew Spira will be published by the gallery later in June 2011.