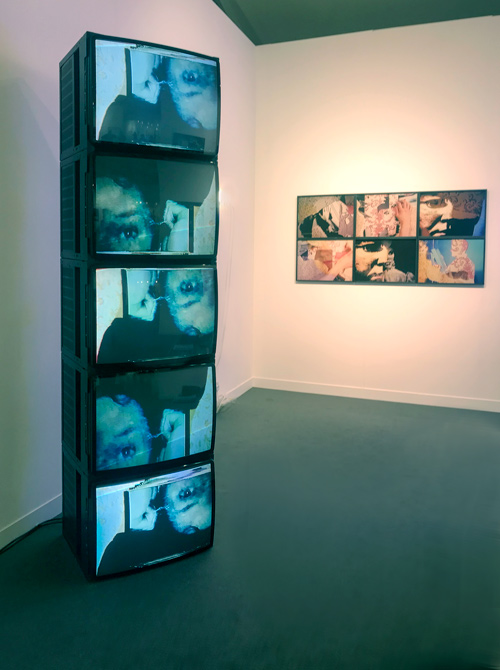 Works by Tina Keane, installed at Frieze London. Above: Faded Wallpaper. Below: SHE. 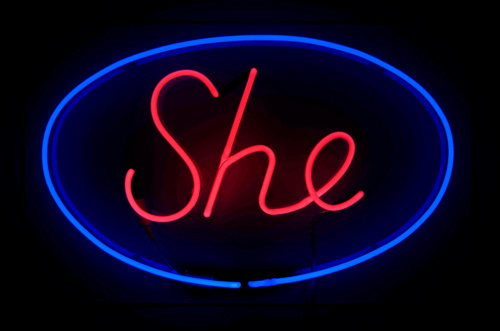 England & Co are exhibiting the work of British artist, Tina Keane, in the Social Work section of Frieze London. Social Work features an international group of women artists whose work responded to the extraordinary political and social schisms of the 1980s.

Tina Keane (b.1940, London) is a forerunner of multimedia art in the UK, who has worked with film, video, digital media, neon sculpture, installation and performance. A founding figure in the women’s art movement, her work is primarily about ‘identity and play’, and reflects her feminist perspective and explorations of political concerns, social issues, gender roles and sexuality.

England & Co are exhibiting works that encompass some of Keane’s feminist and political concerns:

Faded Wallpaper (1988), a poetic, innovative film, is concerned with visual perception, madness and a woman’s search for identity. Presented here as a TV column, alternate screens create illusions of repetition with patterned wallpaper mirroring the woman’s situation: hauntingly undefined, and only vaguely visible. Faded Wallpaper (2017 digital edition) has recently been acquired from England & Co by Tate, and is currently on view at the Fitzwilliam Museum, Cambridge, in the Tate touring exhibition, Virginia Woolf: An exhibition Inspired by her Writings. Faded Wallpaper will also be screened at the Nunnery Gallery in Bow on Frieze East End night.

In Our Hands, Greenham (1982-84), is a video about women’s struggle against nuclear weapons, celebrating Greenham Common peace camp. Images of women protestors are filtered through outlines of hands against the wire-fenced perimeter of the US military base. This video, with a soundtrack collage of interviews, songs and music, embodies ‘a convergence of feminism, performance and a sense of danger, as well as a sense of community’.

Images from a private photo booth performance, SHE (1977-78) are exhibited alongside related neon works, SHE and MALE ORDER: these neon signs were part of Keane’s pioneering multimedia performance installation SHE (1978) at the Hayward Gallery, an early example of performance that incorporated live video, neon, and slide projections.

Tina Keane studied fine art and film-making in London, moving from painting to producing light shows in the late 1960s. In the 1970s, she was active in the Women Artists’ Group, and women’s film distribution group, Circles. She was a Research Fellow, and Lecturer in Film and Video (1982-2012) at Central Saint Martins College of Art & Design, London, and has exhibited internationally. Keane is currently the lead artist for Visions in the Nunnery: Programme 1 at the Nunnery Gallery, London, in partnership with England & Co.