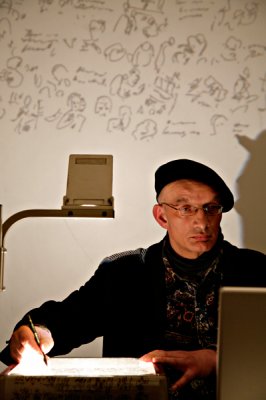 England & Co presents Harald Smykla, a German-born artist whose activities have been largely centred in London over the past two decades. This exhibition documents and illuminates the poetic explorations of materiality and time that pervade Smykla’s work, connecting objects he made in the 1990s with recent work that is the outcome of his ephemeral performative practice. The artist will also perform new Movie Protocols and other activities during the exhibition.

The Movie Protocols are pictographic shorthand notations of films, created in real time as the artist watches them. Sequences of swift line drawings chase one another like words across a page, while he makes a graphic record of every take. Capturing film through live drawing turns the usually passive process of watching a movie into an active one that generates its own visual language. Hectic cuts and on-screen movement result in rapid graphic ciphers; when the camera lingers, Smykla can generate pictorial detail, even recognizable portraits of actors. By using overhead projection (pictured above), he turns Movie Protocols into publicly performed parallel screenings. Each lasts exactly as long as the film, so signs of exhaustion, stress, despair and relief can be observed in both the artist and the drawing.

A major installation is The 7-Year Itch: a documentation of seven years’ live art practice, dating from Smykla’s first public appearance as a live artist/performer on 29 May 1999. The sixty-eight ‘commemorative drawing’ works on paper were made between 29 May 2006 and 27 May 2007, on the anniversaries of the original performances. These hand-made images are sourced from photographic and filmic records, preparative notations, performance residue or solely from memory.

Smykla’s practice largely merges live art with process-driven, unorthodox notions of drawing and object-making – more personally in his Ticker ‘self-cardiography’ drawings. In public street situations, he appropriates and transforms the everyday through site- and context-specific actions and interventions, engaging incidental audiences through ‘re-facing’ money; organizing variant chess games; ‘dentally sculpting’ fruit; collaborating with non-human life, drawing space onto itself in Reprojections and other re-negotiations of reality. And for the international troupe Psychological Art Circus, Smykla has created Live Movies, hand-manipulated overhead-projected live animations with engraved acetate marionettes based on historic photographs of Anna O, whose psychoanalytic case history served as the literary inspiration for the project. All these activities are documented in The 7-Year Itch installation.

Another body of work represented in this exhibition combines more private drawing processes with a performance element: in his Random/Rundum Observations, Smykla harvests an apple found in a random location, slices the fruit, irons the resulting slivers dry, then draws a panoramic (German: rundum) view of the location on to the apple slices, presented as a series of fragmentary drawings mounted on sheets of archival paper. The completeness of the re-assembled fruit corresponds with the completed process illustrated on its slices. Works related to this series include an earlier group of ‘apple drawings’ which evolved from an artists’ residency at Braziers Park in Oxfordshire, where Smykla inscribed the entire text of the Biblical Song of Solomon using gentle pressure to ‘tattoo’ the text inscriptions on to the skins of apples on an orchard tree.

Harald Smykla studied painting and printmaking at Karlsruhe in the 1980s, and pictorial concerns still inform the ephemeral, site-time, context-specific and frequently collaborative live art practice he has pursued since the late 1990s. He first showed work with England & Co in 1991, and has exhibited and performed throughout Britain and Europe: he was one of the six UK artists to present work in Israel and Croatia during the MAP Live 2007 Performance Art Exchange programme, completed a Triparks residency in Exmoor National Park in 2008, and was commissioned for Das Haus der Vorstellung in Berlin. In 2009, he performed as part of East Wing Collection VIII at the Courtauld Institute, London; and with England & Co, he performed Movie Protocols in the gallery and also at Zoo Art Fair.