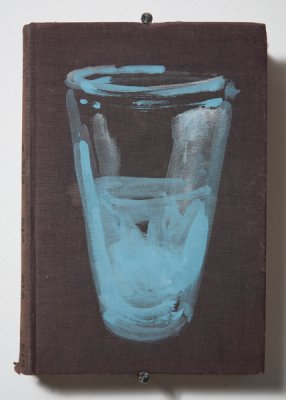 British-born artist Michelle Charles moved back to London in 2001, having lived and worked in the United States for the previous two decades. Since her return, she has established a London studio and had significant solo exhibitions at Kettles Yard and the Museum of the Royal Pharmaceutical Society.

This solo exhibition is focused on manifestations of painted light and images of glass vessels – from an installation of two very recent series depicting Up-side Down Glasses and Crystal Balls – to a group of works from an earlier series of Glasses of Milk painted directly on the covers of economics books. The Crystal Ball series of works on paper and photograms began around 2009-10, during a time of economic crisis when the financial world became uncertain. Charles says that “it made sense to paint this light object that also symbolizes a form of prediction in our changing times… There is a strand in my work that has been there for many years that has something to do with economics: the paintings on the cover of books series first began when I had a studio next to the World Trade Center… they were painted on economics books donated to me from the New School of Socialsearch in New York and later from the London School of Economics.”

Guy Brett, in a catalogue essay for Kettle’s Yard, notes that Michelle Charles has painted glasses or bottles countless times for over two decades, and explains that “What actually happens is that the glasses or bottles become light-traps, or light-vessels. Charles has not yet finished exploring all the possible inflections and subtle nuances that a single, simple object can be invested with… She has shown and continues to show us the extraordinary freedom and inventiveness of the brush stroke that issues from and returns to a single form.” He points out that in order “to render the transparent she must make use of a material that is opaque. How the opaque is transformed into transparency is one of the sources of the magic in her art. The change is not in the material, which remains dense, but occurs in our understanding, our perception.”

Observing her on-going series of paintings of single glasses and bottles on book covers, Brett comments that “the books are faded testimonies of intellectual effort… Many are superannuated from libraries, retired from an active life, and Charles’ glasses and bottles, in the very freshness of their brushstrokes seem to re-nourish the dwindled intellectual energies.”

The American critic and curator, Henry Geldzhaler, when he first was introduced to Charles’s work in the early 1990s, said that he found her work to be beautiful “in its tension between the ancient (glass vessels, for instance) and the absolutely contemporary. In her work she incorporates palimpsestic drawing and re-drawing in her search for the true noumenal shape of things.”