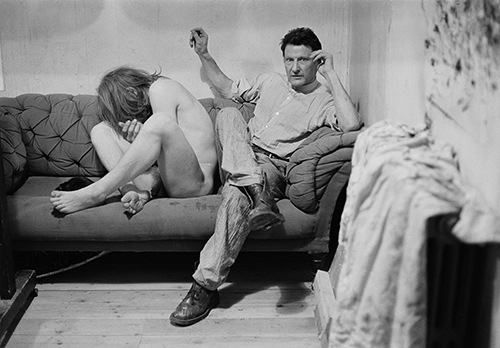 In the East Wing of Somerset House (Stand B2), England & Co presents a cabinet-style room of photographs spanning the 1950s through the 1970s and ’80s to today. There is a particular focus on work from the 1970s and on images by women artists relating to performance art.

Rose Boyt (b. 1958) is exhibiting selected photographs from two series she produced in the late 1970s: from the images she made in her father Lucian Freud’s studio in 1978; and from her Bath series where Boyt says she “wanted to try and find a way to document my family and friends naked in an ordinary location for nakedness… Everybody in the bath, active or passively enjoying themselves, no pressure to pose or try and look sexy or otherwise… I wanted the people in the bath photographs to feel relaxed, to look comfortable in my presence, their nakedness revealed to my teenage female gaze but not eaten up by it.”

Anne Bean (b. 1950) has worked as an installation and performance artist for more than 40 years, using media including photography, light, drawing, video and sound. She uses performance in “a random, protean, art-as-life way” (Artscribe) and the collaborative photographic images recording these events often document risk-taking and feats of endurance.

The image of Zoe Bedeaux’s durational action Nkisi combines the visual representation of an African fetish object inhabited by a spirit, that Bedeaux says, is the “visual symbolism of what appears to be bondage, sexual fetishism”. The ropes binding her signify “supremacy, repression and oppression”, her mask symbolizes invisibility, and the action itself is “the awakening, the rebirth”.

Sue Barnes (1953-2014) explored feminist themes about self-identity, family, and the home in the 1970s and ’80s. Her domestic environment and her own self were her major concerns and themes, and she produced a series of photo-montages of herself in her kitchen with the addition of images of household appliances from magazine advertisements.

The concept that ‘the personal is political’ also informed the work of Tina Keane (b. 1940). Keane is a renown experimental film-maker whose practice has reflected a feminine aesthetic combining femininity, gender roles, sexuality and an element of play. She produced a sequence of private photo booth performance images, SHE (1977-78), that prefigure her ground-breaking multimedia performance of the same name at the Hayward Gallery, London in 1978. The Photomat Self Portrait Series by Susan Hiller (1940-2019) are examples of self-portraiture using the vernacular means of a photomat machine in an underground station in Notting Hill in the 1970s.

The small-scale photographs by Carolyn Gowdy (b. 1956) were made when she was studying illustration at the Royal College of Art in the late 1970s and producing her notable feminist collage series, The Theatre of Women.

Panamanian-born, London-based photographer Iraida Icaza’s mysterious and haunting images emerge from her explorations of “areas between the possible and the impossible, spaces and qualities that contain reality as well as illusion”.

Rolph Gobits (b. 1947) has worked on his major personal project of portraits of travelling entertainers and vaudeville performers for over five decades. He has travelled all over the UK to produce more than 150 photographs, many to be included in a forthcoming book of this project. He has photographed these performers in their modest homes or nearby environment, saying that he feels that he has been capturing a disappearing world, “a forgotten tribe”.

Clay Perry (b. 1940) documented London’s avant-garde in the mid 1960s, becoming the in-house photographer for the avant-garde Signals Gallery. Earlier in that decade, he was studying photography at Guildford Art School and would hitchhike up to London at weekends and “hang out in places like Cable Street”, where he “could find subjects for the gritty social realism I wanted to produce”. Perry produced evocative images of Cable Street in the East End of London – a street already famous as the site of the 1936 anti-fascist Battle of Cable Street. In the 1950s and early 1960s, the area around Cable, Golding, and Greenfield Streets had become known as ‘the Harlem of London’ as many West Indian and West African residents had settled there and established a community.

Howard Selina actively used photography in his land-art works and performative conceptual works of the 1970s. In the series of sequential framed small vintage photographs of Selina’s performative action, Seven small coastal events, Brancaster, Norfolk (1974), words related to the location, such as ‘wind’, ‘gull’ or ‘inlet’, were spelt out letter-by-letter in sign language.