Selected works from the group exhibition are reproduced below.

MORAG BALLARD has evolved her own individual interpretation of the language of Modernist abstraction: it is her method of understanding and depicting space. This exhibition features a group of her most recent constructivist paintings and reliefs. 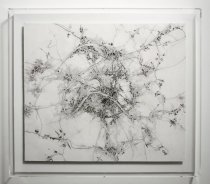 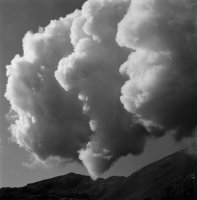 BRIAN GRIFFIN‘s work over the past three decades as an editorial, commercial and fine art photographer has been informed by his interest in film and painting. This work was reproduced in his book Water People and first shown in 2005 at the Art Museum of Reyjkavik, Iceland.Spiral Clouds, Nesjavellir Geothermal Plant, Iceland: archival inkjet print 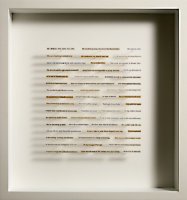 CHRIS KENNY produces a kind of poetry with his three-dimensional collage constructions – collections of found text with themes that are often humorous, sometimes melancholy, as Kenny gently subverts the meanings of the text fragments he culls from discarded books.All the Way to Idiotsville: construction with found text 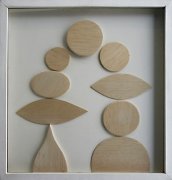 PAULE VEZELAY, born in England in 1892, by the 1930s had become part of the Parisian avant-garde after moving to France and adopting the name Paule Vézelay. She joined Abstraction-Création in the 1930s when she began her series of abstract three-dimensional constructions.

ROLF BRANDT first became interested in Dada and Surrealism in the 1920s, making drawings and collages. His brother, Bill Brandt worked in Man Ray’s Paris studio in 1930, and the brothers absorbed a love of subversive experiment that continued when they moved to Britain. 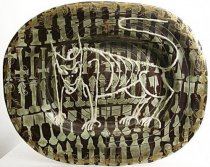 GRAYSON PERRY works in a variety of media, but is best known for the ceramics he has been making since the early 1980s, which
are decorated with figures, objects and text. He ‘wants to make something that lives with the eye as a beautiful piece of art, but on closer inspection, a polemic or an ideology will come out of it’. 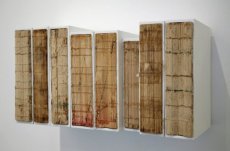 VITO DRAGO is interested in the materiality of books, and his cased book constructions use books as being representative of knowledge – he questions the certainty of that concept through deletion and obliteration – the content is irrelevant.

Paule Vézelay from 1929 to1933. A group of drawings and studies for paintings come from Vézelay’s personal collection, made when they lived and worked together in the South of France. 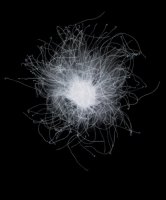 BARBARA & ZAFER BARAN‘s Ephemera series are a plant-based series exploring the fragility of life, often suggesting microscopic or cosmic phenomena. The images were created using a digital technique, an equivalent of the photogram, but on a large scale. 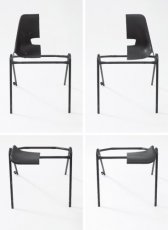 RALPH BALL & MAXINE NAYLOR‘s prints evolved from their practice of ‘Design Poetics’: commentaries and contemplations on the cultures of Modernism, Postmodernism and contemporary design – their work explores the conceptual, provocative and poetic possibilities of ‘the spaces in between’. 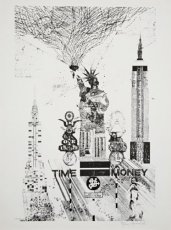 JOHN FURNIVAL‘s prints and drawings connect his antecedents in the Dada and Surrealist movements to his affinities and associations in the early 1960s with the innovators of Concrete poetry, the Beat poets, and the Fluxus and Mail Art movements.

SHANE BRADFORD has established a reputation for his objects that span painting and sculpture – he dips selected objects into gloss paint in a process of precise sequences. The dipped objects are usually appended by his trademark solid drips of thick paint.

What the Human Race Is Up To: gloss paint on hardback book

MICHAEL BUHLER was fascinated by UFOs and extraterrestrial phenomena and his work often combined the everyday with the paranormal. He made a series of drawings in the 1970s of reported UFO sightings. 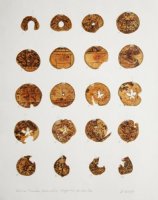 HARALD SMYKLA’s works using apple slices each constitute a whole fruit, thinly sliced, pressed and dried into parchment-like discs. He draws on to the slices, sometimes inscribing poetry or making observations of the locality where the apple was harvested.Vertical Rundum Observation, Malpas Road, London SE4: ink on sliced and ironed apple laid on Somerset paper

« Talking of Yves: Friendships and connections in Paris, New York & London » Beneath the Radar in 1970s London