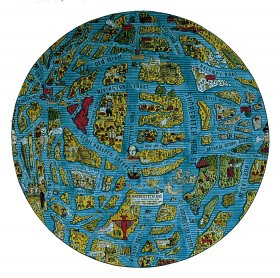 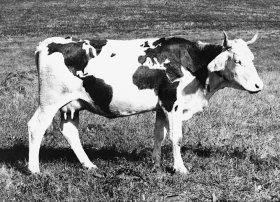 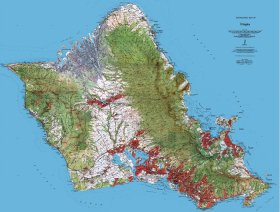 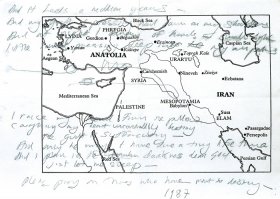 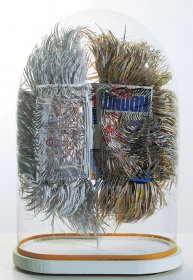 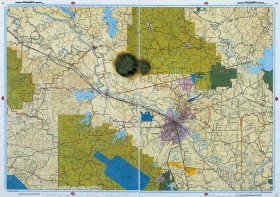 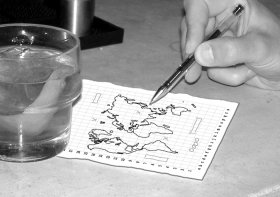 The second of three exhibitions curated by Jane England

Maps are accepted as a universal language, with codes of symbols that are understood world-wide. They are a way of comprehending and dealing with notions of space, and a method of charting ideas and gathering and ordering knowledge. We form ‘mental maps’ of places by processing information in relation to our own personal perceptions of the environment, while actual maps provide visual expression of our need to define our physical world and its boundaries.

These boundaries shift and change: individual cultures and geographic identities are modified by the increasingly mobile forces of economic, political and social globalisation. In response, and as a way of dealing with their own place in the world, artists have become interested in using the visual language of maps alongside map-making strategies and systems. This exhibition is the second in a series exploring artists’ geographies, and over thirty artists from Britain and abroad are exhibiting works that use maps and mapping systems.

In the 1960s and ‘70s, Minimalist artists used maps, charts and cartographic methods as a way of establishing order, while Land and Conceptual artists used maps and photographs to represent their activities. Works from the 1970s and ‘80s in this exhibition include Susan Hiller’s series of Rough Seas postcards, works that propose Britain as ‘a thin edge between land and sea: maps emptied of internal positions’. As part of his Flexible Geography project, Michael Druks’ photographic series from 1971 depicts worlds and continents made from crushed paper maps. Jugoslav Vlahovic is showing his famous surrealist photograph of the 1970s, World Cow, in which the markings on a cow form a world map.

The possibilities of map-making have been stretched by digital technology which has replaced hand-drawn maps and atlases – it is now easier for artists to manipulate cartography to create their own new maps. Japanese artist Satomi Matoba’s seamless digital manipulations produce a map of a Japanese British Isles; a map that merges Pearl Harbour with Hiroshima; and By the Shores of a River – a convincing map of a totally re-made world with disturbing juxtapositions. Simon Faithfull has created a reversed world where the oceans have become the continents, and the land has become the sea.

Tracey Emin is represented by A War Poem, movingly inscribed across a map of the Middle East, while Cornelia Parker drops meteorites on maps of towns in America that share famous place names (such as Paris in Texas) in her recent series of multiples. Chris Kenny’s three-dimensional Street Drawing series uses map sections of various cities inscribed with the names of streets that are mounted on pins and placed in arrangements that echo Mondrian’s paintings of the last century. Alasdair Currie has mapped John F. Kennedy’s assassination on Lee Harvey Oswald’s bed – the presidential car is tracked through a telescopic sight in an exploration of An American’s Dream.

Jason Wallis-Johnson minutely maps roads and buildings and makes light-boxes that are like aerial views of cities seen from a plane at night. In a new work he creates an elegant by-pass through London that relentlessly sweeps away all in its path. Jonathan Callan has obliterated and replaced the names on a map of India with calligraphic encrustations of black silicone; and in another work gouged paper shavings form streams flowing from a map section of Wales.

Layla Curtis traces hemispheres, and in World Political she subverts the normally trustworthy world map.
Emma Williams has painted a London made from paper maps – the folds and undulations of the maps forming new views of the city. Joe Scotland and Lee Birkett both embroider household linen with maps, incorporating found historic stains and marks. Adam Dant maps Shoreditch as a globe, while Georgia Russell has literally dissected an A to Z of London, preserving the resulting shredded structure under a glass bell-jar. Lutz Becker’s collages chart ‘the changeable topography’ of his imagination; and the screenprints of Alberto Duman are descriptive word maps, one charting a section of Westbourne Grove, the site of the gallery, in ‘a flat plan of words in space’.

The Map Is Not the Territory i

The Map Is Not the Territory iii >