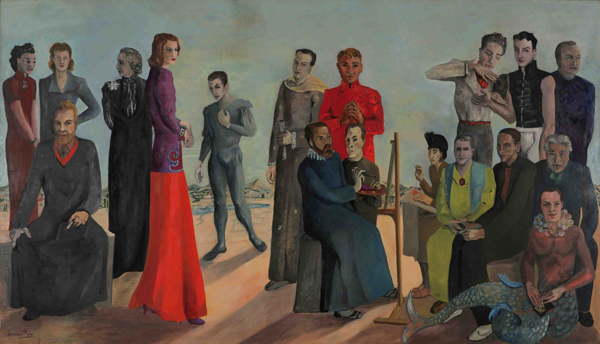 The focal point in this exhibition is Francis Rose’s mural-size painting L’Ensemble (1938), first exhibited in his 1939 exhibition at Le Petit Palais Musée des Beaux Arts in Paris. This painting depicts Rose’s circle of the period, including Jean Cocteau, who he first met in Villefranche in the mid 1920s; Gertrude Stein with her partner Alice B. Toklas; the artists Francis Picabia, Pavel Tchelitchev and Christian Bérard; the ballet dancer, Serge Lifar; and the American writer, Natalie Barney.

Artistic precedence is central to Volker Eichelmann’s work: he frequently seeks out forgotten or overlooked practices from the past to reconsider its contemporary critical potential. His series of text-paintings features a chorus of voices emanating from the likes of Stephen Tennant (1906-1987), Brian Howard (1905-1958), William Beckford (1760-1844), Harold Acton (1904-1994) and Sir Francis Rose. These combinations of drawing, painting and collaged text present brief autobiographical utterances culled from their original context and transformed into often poetic evocations of distant places and encounters.

For this exhibition, Eichelmann also presents a number of large scale mixed-media works: assembled as an interplay of construction and disintegration, collage and painting. The patterns which emerge through tearing, pasting and scraping are as much reminiscent of works by Kurt Schwitters or Robert Rauschenberg as they are evocative of Francis Rose’s predilection for minor vandalism when surreptitiously removing small samples of particularly attractive wallpapers from French chateaux and English country houses to fashion his very own take on the livre d’or in the 1930s: a scrapbook of wallpaper fragments (acquired by the Whitworth Art Gallery after Rose’s 1988 retrospective exhibition at England & Co).

Francis Rose, heir to a Scottish baronetcy, was born in England, but brought up in the South of France. He lived in Paris between 1929 and 1936, where he studied with Francis Picabia and José Maria Sert; worked on set designs for Diaghilev’s Ballets Russes; and painted in Brittany with Christopher Wood in 1929. Rose shared his first exhibition with Salvador Dali in 1930, and in 1931 was introduced to Gertrude Stein who became his patron and friend, and to her partner, Alice B. Toklas (he later illustrated The Alice B. Toklas Cookbook). Rose traveled extensively in the 1930s and exhibited in Paris, London and New York. His work is represented in the Yale University Art Gallery (Stein-Toklas collection), the Fine Arts Museums of San Francisco, and the British Museum. In 1961, Rose published his memoir, Saying Life; and in 1972, he made a brief appearance as ‘Lord Chaos’ in Kenneth Anger’s film Lucifer Rising. In 2012, his painting, Hommage à Gertrude Stein, was included in the exhibition, The Steins Collect: Matisse, Picasso and the Parisian Avant Garde, which traveled from San Francisco MOMA to the Grand Palais, Paris and the Metropolitan Museum, New York.