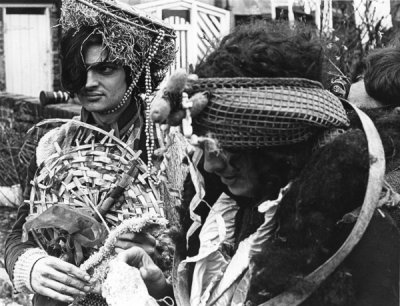 This exhibition launches the publication of 99 Balls Pond Road: The Story of the Exploding Galaxy by Jill Drower, and celebrates the Exploding Galaxy, described as “a collective of artists, musicians, poets and dancers who shared a creative spirit that defied the boundaries between art and life”. This experimental dance drama group lived as a community in Balls Pond Road, North London from early 1967 until the Galaxy disbanded and dispersed at the end of 1968.

The historian, John Oliphant writes in the book’s foreword, “If the past is a foreign country, Jill Drower’s work is a guide… by someone who was present and deeply involved, to remote and previously unexplored valleys of London’s alternative culture in those years… There is considerable interest at present in the work of once obscure groups active in the 1960s in carrying art into new territories… But Drower here draws attention to, and documents meticulously, the work of the Exploding Galaxy, a group that worked on our doorstep, but has, with the exception of David Medalla, been almost completely neglected. She traces the group’s contribution to the seminal events marking the emergence of the London underground, from the ‘14-Hour Technicolor Dream’ to the Legalise Pot rally.”

David Medalla – painter, poet, sculptor and dancer/performer – in a 1967 interview published in the International Times, said that he had “always been dissatisfied with making art-objects for galleries, so I envisaged the Exploding Galaxy, which I meant to be a dance-drama company. Since then however it has evolved and proliferated on its own, involving 250 people altogether, 25 of whom have been constantly working on new forms of expression.”

Medalla is an international artist born in Manila, who had previously co-founded the Signals Experimental Gallery in 1963, which had focused on kinetic art, and where his now famous ‘bubble machines’ were first shown. Medalla’s Signals co-founder, Paul Keeler, owned the house at 99 Balls Pond Road which became the home of the Exploding Galaxy after the collapse of Signals. The Exploding Galaxy – “a kinetic confluence of transmedia creators” – can be seen as a logical progression from Signals gallery into the era of ‘Flower Power’.

The Exploding Galaxy was initiated by Medalla early in 1967, and by October that same year, Medalla’s The Bird Ballet was performed by Galaxy members at the Roundhouse, in Chalk Farm, North London. In the summer of 1968, Medalla and recently arrived American artist John Dugger, ‘choreographed’ the Buddha Ballet – a public participation art event – every Sunday on Parliment Hill in Hampstead.

Drower’s narrative extends beyond the world of London’s galleries, clubs, performance spaces and exploration sites in those years, and her interviews with many of the women involved in the Galaxy introduce another perspective on the ‘sexual revolution’ as it played out in group and personal relationships.

The exhibition includes, artworks, posters, ephemera and documentation, films and photographs by or relating to many of the participants in the Galaxy.