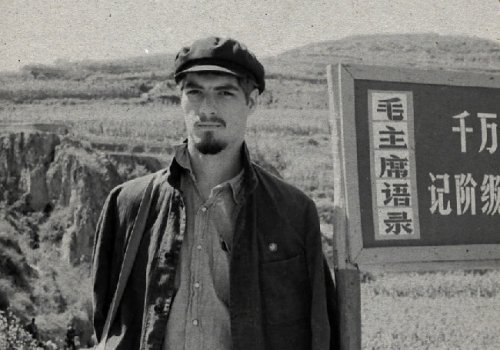 John Dugger in China, photographed by Peter Fisher in 1972.

John Dugger (born Los Angeles, 1948) arrived in London in 1967. As a participant in the Exploding Galaxy group, he met the Filipino artist, David Medalla with whom he created and organised participatory art events, as were other expatriate artists then working in London such as the South American artists Lygia Clark and Helio Oiticica. These events with Medalla included the Buddha Ballet, a weekly audience-participation performance event on Parliament Hill in the summer of 1968; and Dugger’s People Weave A House! project at the ICA in 1972.

In 1971, Dugger exhibited his multiple sculptures, the Perennials, in the Whitechapel Gallery’s Multiples show, and was included in Pioneers of Participation Art at MOMA, Oxford. This period culminated with Dugger and Medalla being asked by Harold Szeemann to curate their own pavilion as part of Documenta 5 in 1972. The resulting People’s Participation Pavilion included David Medalla’s A Stitch in Time and Dugger’s Body Conductors.

Dugger was the founder of The Artists Liberation Front in 1971, and in 1972 was invited as part of a youth delegation to visit China during the closing phases of the Cultural revolution, thus becoming the first American artist to visit China since the 1949 revolution. In the early 1970s Dugger began to work with cut-fabric appliqué banners, founding Banner Arts. His vast Chile Vencera Banner was made for a mass rally in Trafalgar Square in 1974 and was exhibited recently in Textiles: Art and the Social Fabric at MuHKA in Antwerp. Studies and documentation relating to the Chile Vencera Banner are featured in this exhibition.

Dugger first created his Perennials in Paris in 1970: these simple flower-like sculptures made from modern plastic materials are activated by participation (‘ergonic’ in Dugger’s personal terminology) – the work is coiled up, folded back on itself and set down to unwind – and responds kinetically, utilising the ‘plastic memory’ of its molecular form. A Perennial‘s unwinding it is like a flower in its cycle of growth, ‘opening up and declining into rest’, like ‘the unfolding of a blossom or the sprouting of a seed in the Spring’.

In his manifesto, The Ergonic Messenger, Dugger explains how in Participation Art, the body or hand of the viewer is ‘used to give forceful impetus to the artwork by articulating or positioning the sculptural elements manually… relying on the power of the human hand to provide action or motion.’ This ‘labour’ is ‘shared between the artist’s manual effort in creation and the participant’s manual effort in appreciating and opening the work of art… .’ Participation Art is ‘an art that evolves and grows through contact with the creative interaction of people engaging their bodies, senses and activating hands.’

John Dugger (and David Medalla) were among the artists featured in the recent exhibition This Could Happen to You: Ikon in the 1970s at the Ikon Gallery, Birmingham.

« Beneath the Radar in 1970s London » Wandering Lines: Automatic Drawing to Abstraction