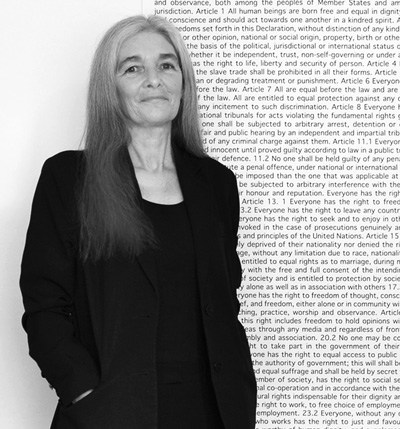 Monica Ross was a British artist working with video, drawing, installation, text and performance. She first came to prominence as a feminist artist and organiser and was co-responsible for collective initiatives such as the influential women’s postal art event Feministo: Representations of the Artist as Housewife in 1977 and the touring project Fenix.

In 1980, Ross co-established the Sister Seven group, a network for the distribution of poster art and performances which took place in church halls, libraries, on the streets and at peace camps including Greenham Common. She continued to instigate collective work with women’s affinity groups, which led her to work with the medium of performance.

From 1985, Ross was senior lecturer on the Fine Art and Critical Studies BA at St Martin’s School of Art. Her own practice was concerned with issues of memory, time and the archaeology of the present and she considered expanded contexts for performance and its dissemination.

Recent exhibitions include Monica Ross: valentine at England & Co (2014) and Monica Ross: A Critical Fine Art Practice, Chelsea Space, London (2016). Monica Ross: Ghost in the Spinning Mill, the first comprehensive exhibition of her work in Germany was held at Halle 14, Leipzig in 2022.

A monograph about the artist, Monica Ross: Ethical Actions, A Critical Fine Art Practice is published by Sternberg Press.