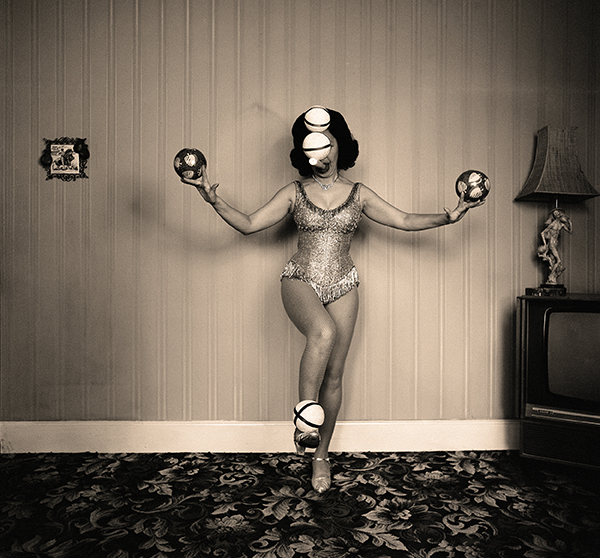 Please email the gallery info@englandgallery.com to make an appointment to visit the exhibition in person. We will be observing all current health guidelines and request that visitors wear a mask.

To complement Photo London Digital, England & Co are holding a gallery presentation of works from their digital booth in a temporary space in central London, 33 Thayer Street, W1U 2QX.

England & Co’s presentation of photographs is primarily of works from the 1960s through to the 1980s. There is a concentration on work by artists/photographers of the 1970s and, for the women in particular, the concept that ‘the personal is political’ often informed their practice.

Anne Bean has worked as an installation and performance artist for more than 40 years, using media including photography, light, drawing, video and sound. She uses performance in “a random, protean, art-as-life way” (Artscribe) and the collaborative photographic images recording these events often document risk-taking and feats of endurance. In Tourist (1985), Bean inscribes a series of distorted self-portrait images with a text by Susan Sontag: “The camera makes everyone a tourist.”

Hannah O’Shea‘s A Visual Time-Span (A Visual Diary 1974-76) is an eclectic ‘collage’ work made over several years, representing her own live art and film work, and her participation in, and documentation of, Women’s Liberation and Gay Rights demonstrations. She printed a ‘still’ image of the same title where she had both painted and documented the performer – it was also used for the cover for an issue of Spare Rib magazine with the headline “Disturbing Images of Women”. O’Shea says that her image “is a reclamation of the female body, from its core of ‘being’ and a revelation of the ‘female gaze’.”

In 1980, Wilma Johnson co-founded the Neo Naturist cabaret with Christine and Jennifer Binnie and Grayson Perry, and performed with them during the 1980s. As a student at St Martin’s School of Art, Johnson painted and photographed Christine Binnie’s naked body: this image of a prototype Neo Naturist performer is currently included in the exhibition Art, Life and Us at the Towner Art Gallery.

Rose Boyt is represented by several works from a series of ‘bath photographs’ produced in the late 1970s. She says that she “wanted to try and find a way to document my family and friends naked in an ordinary location for nakedness… Everybody in the bath, active or passively enjoying themselves, no pressure to pose or try and look sexy or otherwise… I wanted the people in the bath photographs to feel relaxed, to look comfortable in my presence, their nakedness revealed to my teenage female gaze but not eaten up by it.”

Iraida Icaza’s mysterious and haunting images emerge from her explorations of “areas between the possible and the impossible, spaces and qualities that contain reality as well as illusion”. Her most recent solo exhibition was held at the Museum of Contemporary Art in Panama (MAC Panamá): Iraida Icaza and the Forgotten Museum.

Tina Keane’s practice reflects a feminine aesthetic which combines femininity, gender roles, sexuality and an element of play. In this current moment, Keane’s series of still images from her film Faded Wallpaper are a metaphor of confinement. The film was based loosely on a short story by Charlotte Perkins Gilman in which the narrator is confined to an upstairs room. Faded Wallpaper “is concerned with visual perception, madness and the search for identity. A woman, isolated within a room, becomes obsessed with the wallpaper surrounding her, seeing strange images within its faded patterns… As these images become more insistent she begins to strip the wallpaper away in an attempt either to banish the images or get to their source. Words and sounds run through her head as she peels away the layers, questioning her own self-image, her imagination and her sanity…”.

The photographs by Carolyn Gowdy were made when she was studying illustration at the Royal College of Art in the late 1970s and producing her feminist collage series, The Theatre of Women. She made use of the Photography Department’s darkroom to produce editions of small-scale silver bromide prints of the photographs she had been taking as a personal project.

Elisabetta Catamo became well-known in the 1970s and ’80s as a photographer of intensely coloured, surreal tableaux of juxtaposed objects and/or body elements. Her work was featured in magazines such as ZOOM, but when her photographs were widely copied without credit by the advertising industry, she decided to concentrate on her sculptural constructions. Recently she has begun to revisit and produce editions of these early works for the first time.

Michael Druks established an international reputation in the 1960s and 1970s for highly original conceptual work incorporating performance and photography. A major series involved varied interventions with television: he reacted and interacted with TV screen images in both filmed performances and with photography. The subversive, humorous or politically charged results were made in an analogue, pre-Photoshop era.

Clay Perry documented London’s avant-garde in the 1960s and was in-house photographer for the experimental Signals Gallery. He produced many iconic portraits of artists, photographing Yoko Ono at her 1967 exhibition at the Lisson Gallery, Half-A-Wind, when she exhibited Half-A-Room, a conceptual work made from various objects that had been cut in half and painted white.

For more than five decades, Rolph Gobits has worked on his major personal project of portraits of travelling entertainers and vaudeville performers. He has travelled all over the UK to produce more than 150 photographs, many to be included in a forthcoming book of this project. He has photographed these performers in their modest homes or nearby environment, saying that he feels that he has been capturing a disappearing world, “a forgotten tribe”.

British sculptor, Paul Hazelton, known for his extraordinary sculptural works with dust, is on a “metaphysical quest… searching, through his work, for the ultimate quintessence, the thing that holds everything together.” He has recently begun to produce poetically charged photographic images as part of his practice.